My running has been getting pretty consistent lately...but the past week has been weak in the running department. I spent much of the weekend at the hospital with a friend of mine named Ken. One week ago tonight, Ken suffered a massive hemorrhagic stroke. The good news is that he survived and has been awake in the ICU. He is still on a respirator - they are slowly working to wean him off. The not so good news is that he cannot move his right side. The MRI showed a rather large area of bleeding on the left side of his brain. We are talking to him and he is nodding his head and even smirking at some of our dumb jokes...so he seems to be doing well - considering.

Ken has a long road ahead of him. He is single and 43 years old.

The doctors say it was high blood pressure that caused the stroke. Ken has had a lot of stress in his life and not a lot of time to exercise or eat right.

It gives me pause to consider the amount of activity in my life - and I am the kind of person who tries to do it ALL. Time to slow down a bit.

When I wake up in the morning, I realize how thankful I am that I can get up and move around normally. I am thankful that I have two beautiful, healthy children and a wonderful best friend and husband. I have a home, a job and the ability to run.

I am truly blessed.

Peace to you, Ken. Looking forward to seeing you at the finish line at Disney again!
Posted by MarathonChris at 5:42 PM 6 comments: 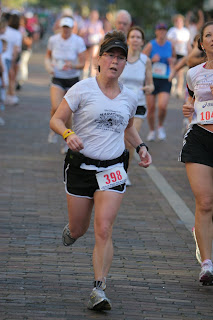 Ok, before I begin let me get this off my chest.

This finish line picture makes me look fat! Next time the Amphipod belt goes UNDER the t-shirt.

Ok, now that I got that out of the way, I can continue to the race report...

The WPRR is a favorite local race for a few reasons. It is a 10K distance (there aren't many local races at that distance) and it is held in beautiful Winter Park, Florida - where you run through some beautiful neighborhoods around some quaint lakes, by some very expensive homes, and thankfully, under lots of shade provided by the large oak trees that dominate the route. Since the race is held in March, the weather is usually ideal.

This is also the first race I try training for after running the Disney Marathon. At least, that has been the plan for the past 2 years - but this year, like last year, things didn't work out as hoped. Last year I couldn't get the workouts in for my 10K training. This year, in addition to working full time, I started graduate school. That, combined with moving the race up 2 weeks earlier, made it impossible to properly train for a PR. I decided to run the race for "fun" since my husband was running and my older daughter was signing up for the 2 mile race.

And this year, the t-shirts ROCK. Wicking t-shirts with different men and women styles!

First up, the 2 mile race. My 13 year old running partner and I had been running on and off for a few weeks. She was ready to run 2 miles! It was still a bit dark at 7 am when her race started. 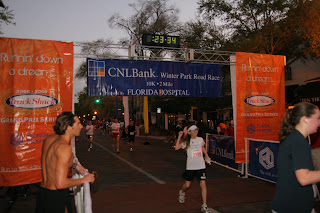 My husband and I lined up behind the 10 min/mile area - toward the back. Finally, the familiar air horn sounded and we were off. My husband ran with me for about a half mile before he took off ahead of me at his pace. I then settled into my own rhythm for the race.

I passed mile 1 at 10:28, AHR = 144 bpm (according to my Garmin data) - I was happy with that pace. I wanted to stay under an 11 min/mi and I hadn't gone out too fast. I decided not to take walking breaks but would try to walk either at the mile marks or during the water stops. I felt pretty good after 1 mile so I just kept going.

Mile 2 was in 10:29, AHR = 160 bpm.. I was keeping a steady pace. And there was a water stop between mile 1 and 2 where I walked through just to drink the water - then continued on the run. I was still feeling pretty comfortable.

Mile 3 was in 10:20, AHR = 166 bpm - a tad faster than the first two miles. Probably because there were no water stops between mile 2 and 3. A few observations and thoughts while running: 1) I was passing people who seemed way out of breath for so early in the race. I was feeling their pain! I was still relaxed and running comfortably but on tempo. 2) It was pretty warm...and I was extremely thankful for the trees. 3) I had a good strategy for the "hills". There are a few areas where the course goes up and down hill, although nothing like my San Diego run. For the up hills I just shortened the stride and kept the turnover up. For the down hills I relaxed and let gravity take me down.

Mile 4 was in 10:26, AHR = 170 bpm. There was 1 water stop where I also took a Clif Shot. I was still maintaining my pace from the beginning. I was really enjoying the view along the route this year and checking out the homes along the way with amazement. The houses were older but large and very nicely done - but way beyond my means :-)

Mile 5 was in 10:27, AHR = 169 bpm. Consistency! I felt like I was slowing down so I spent time focusing on keeping my pace up. It was in the 4-5 mile time period where my heart rate began to get "up there". Since my Mile 4 AHR was 170 bpm during mile 5 I shortened my stride and took it easy... I realized during this race that I wasn't being passed the entire time...but that in the last couple of miles I was keeping up or passing other folks. As I ran along and passed one runner, I heard my name from behind....it was Cheryl, a running friend I knew through Maddy who I have met at a number of races including Disney's Goofy this past year. I ran with her and we chatted a bit. She told me that she had injured her hip doing Goofy and was just getting back into racing. I asked if she was running San Diego with Maddy and she told me she was training for the Seattle Marathon in June. She told me not to worry about waiting for her - so I said goodbye and pressed for a strong finish.

Mile 6 was in 10:01, AHR = 174 bpm. I sped up a bit since I knew I was in my last mile. I recognized the area and knew that we were close. As I made the last turn before running down Park Avenue on the final stretch, there were a couple of Track Shack folks cheering the runners on. As I was running by I heard one of them yell, "Hey, I know you, I know you, you are Christina!" I looked back and waved and she waved at me, then waved me to go on and finish.

I started to pick up my pace for the final part. I spotted my husband and girls about .1 from the finish - cheering me on. I looked at my watch and realized I was close to my 1:05 stretch goal so I used what gas I had left to go for a strong finish. I focused on relaxing and turnover...AHR = 182 bpm

And the biggest surprise? I had run a negative split! I ran the first 3 miles in 31:07 and the second 3 miles in 30:54 (with the last bit in 3 min per Garmin). I think I ran the best race I have ever run - going out just right, pacing just right and very consistently, and finishing well. I was spent at the end - but the right amount of "spent" for a race. 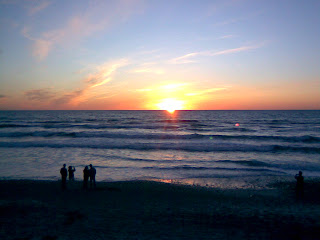 Although it was just a short trip to San Diego, I fit a run in one afternoon after our meetings concluded. The hotel staff (Hilton Torrey Pines) told me I could run north and into the Torrey Pines State Park - the beach was about 2.5 miles away down hill.

Hmmmm, I would then have to run up hill to return.

The hotel people also told me that sunset was around 6:30 pm so if I got going around 5:30 or so, I could be back before it got dark.

It was a bit chilly for me to start and my Garmin seemed to take FOREVER to find satellite...but after a mile I was thankful that I was in short sleeves and shorts. It was a nice easy run down to the beach. The downward slope of the run wasn't so bad until I got to the last half mile where it got particularly steep. I could tell that it was NOT going to be a lot of fun coming back. But, I took it as a challenge for the trip back to try to run all the way up the hill without stopping.

The beach was just gorgeous and the sun set while I was starting my run back. Here is a short video clip...it is hard to hear but you can see the view I had while running near the beach.

I had 2.5 miles back to the hotel and with the sun setting, I needed to get moving so up the hill I went. I did a pretty good job running up hill - but my calves let me know that they were not going to let me forget this run for a few days! I took one short walking break on the way up shown in this next video.


I had enough light from dusk to run back to the hotel and arrive just as it was really getting dark. 5.07 miles in 59:57 - total elevation change over the 2.5 mile trek was 1120 ft. Most of the uphill run was in mile 4 which I ran in just over 14 minutes. Overall, another great San Diego run!
Posted by MarathonChris at 2:06 PM 8 comments:

Running Again and Off to San Diego 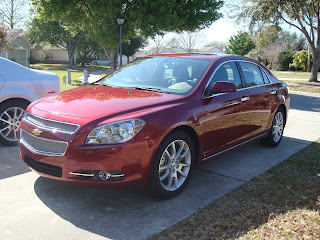 The good news is that I am back on the road again, albeit about 3 days a week. I got a 6 mile run in last Sun after running 3 last Sat! I have decided to run the Winter Park Road Race on March 14th - not for a PR, but just to finish and have fun. My husband will be running the event and my daughter will run the 2 miler.

It feels good to be out running again.

My one remaining grad school class is going well....maintaining a high A average.

And I am enjoying my new wheels. On the last day of January, I bought a 2009 Chevy Malibu LTZ. Coolest feature: Bluetooth phone connection to my cell. Next coolest: Remote start. And finally something you don't think a Floridian would appreciate - heated seats!

Tomorrow I am off on a 2 day trip to San Diego. I hope to sneak in a run while there!

Enjoy your running adventures!
Posted by MarathonChris at 10:11 PM 6 comments: