The OUC Half Marathon (updated with pics) 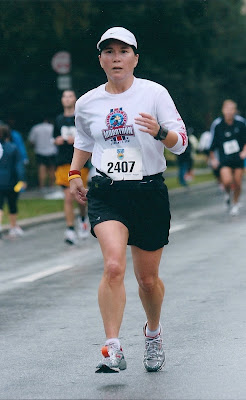 I was pretty excited about this race. My training this fall has gone really well, perhaps because I didn't run a fall marathon but have been focused on training for Disney. My training times have been getting better and better. It appeared that I could probably maintain a 10:30 min/mi pace for the race - which would land me a PR. My previous half marathon PR was 2:20:42, set in 2007 during this same race on the heels my marathon PR - the Marine Corps Marathon.

As for most races, I watched the weather report for the week leading up to the race. This race was scheduled to be run in some of the rainiest weather we have had all year. If it has only been a week ago, it would have been 48 degs F at the start and dry - perfect running weather! Rather than be disappointed, I took this as a challenge - a chance for a real running adventure. In my 3 years of marathon training and running, I have never raced in the rain.

I polled my Facebook friends and, of course, my running advisor Shirley , to figure out what I should wear for the race. The conclusion was long sleeve tech shirt, shorts, hat or visor and garbage bag for the start. I also decided to bring my iPod Shuffle with a few Podrunner mixes on it and set it up to play the 175 bpm mix.

Last night, a local Facebook / Twitter friend Kitzzy opened up her apartment for some of her running buddies to hang out in before the race since she lived just 2 blocks from the starting line. So about 6 of us showed up at Kitzzy's place just before 6 am to get geared up for the race. It was at this point I realized that I had done something I have NEVER done before a race....I forgot my race number (and also my D-tag). Since OUC offers race day registration, I figured I could get another one from registration. Fortunately it wasn't really raining so I headed over and found Shirley there at her usual station working on the computer - only she was supposed to be running the race. She was just helping out since she was there early. At the registration desk, I shared my dilemma but it was no big deal...I guess lots of folks have forgotten their number at one time or another. After getting my new number, I had time to go back to Kitzzy's place to pin my number on and head over to the race with the others.

Unlike most races, there was no national anthem played....we simply lined up, and at the appropriate time we started. There wasn't even a noisy starting air horn. I started up my Podrunner mix and we were off and running. Here is a recap of some of the miles the race:

Mile 2 - Hit mile 2 at around 20:15. I was still going a bit too fast, so I shortened up my stride. I decided to take my walking breaks with the water stops instead of at each mile - this improved my pace since the water stops were probably 1.5 miles or so apart.

Mile 3 - Mile 3 came at 30 min and change - I took an extra walking break to catch my breath. I wasn't quite into my rhythm but was getting there. At the next water stop I took my first Clif Shot.

Mile 4 - For the first few miles there was no rain...it was cloudy, warm and humid. Just as I was thinking I would like a little rain to cool things down a bit, it started to rain lightly. And it felt good!

Mile 6 - Maintaining pace - staying just under the 10:30 min/mi pace I was shooting for. Feeling kind of tired but pushing on and still walking just the water stops.

Mile 8 - Came at 1:24 - keeping pace. It was around this time that my heart rate strap started to bother me. It felt like I was chafing. Since I really didn't need the heart rate feedback, I decided to remove the strap and just hook it around my waist.

Mile 10 - This mile comes on Orange Avenue - a wide open area which, in past races, would be really hot and tough to run. Today, it was raining lightly and the wind was starting to blow a little. It felt really cool and nice! Just a 5K left. I don't recall where Jim was hiding, but it was great seeing a familiar face cheering everyone on!

Mile 11-12 - I was feeling pretty tired but I knew I needed to keep pushing if I was going to make that PR. Rather than walk I tried to shorten up my stride. My 175 bpm podrunner mix had ended (I played it twice) and I was now listening to a 177 bpm mix. At the mile 12 intersection there was car waiting for the runners. Smoke was coming out of it but just as I passed, runners started yelling at the guy to get out because his car was on fire. As I looked, small drips with flame were coming out underneath the engine of his car. I don't know what happened after that.

Mile 12-13 - I got a burst of speed early in this mile and started taking off and passing up a number of runners. However, about halfway through the mile, I was loosing energy. I slowed it down a bit and got one more walk break in before the final push.

Last 1/2 mile - I picked up my stride and really pushed it through the last half mile. I saw that the clock was 2:18 and change - good enough for a PR! When I finished, I was spent...and that is how it should end!

I stopped my Garmin at 2:18:26 - my unofficial time. As I walked out of the finish chute looking for food, Shirley ran up and met me. We chatted for a bit before I found a bagel and sports mix.

I stopped at the board to see what time posted for me but couldn't find my number. I just checked the online results and I don't show up. I sent the race organizers an email to see if they didn't get my number in the system. It isn't a big deal, but I like having the historical information there with the other runs I have done. And now that I think about it, I may pursue this because I may want to use this time for corral placement at Disney - so they don't place me in the 5:30 corral. 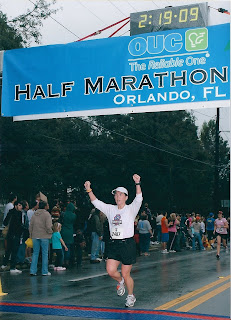 And now I will reward my efforts with a nap! 4:45 am came early today! 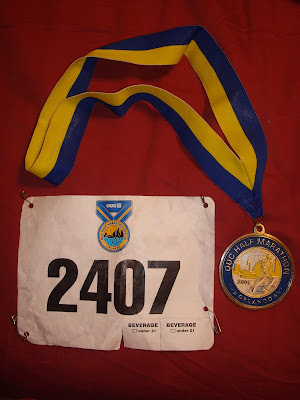 Posted by MarathonChris at 11:52 AM 9 comments: