It started out innocently enough. I started running on New Year's Eve - then started running with my husband, who decided he wanted to run every day to get back into shape. I wanted to join him mostly because I like running together and, as I found in those first couple of weeks, it was a great time to touch base and catch up on what was going on.

But I had never run more than 3 or 4 days in a row without a rest day. This would be a new challenge! I would start with running shorter runs and see where it goes from there.

A few days into our challenge I saw a Facebook post by John Bingham of the 100 Days Challenge. That sounded like a fun challenge to join - a goal to see just how far I could take my everyday running. After a week or so, my husband became ill and had to stop running - but I kept going. I even replaced 2 runs with 2 mile power walks on days when I was too tired or my husband's legs hurt too much - but outside of those two days - I have RUN every day in January. I have completed day 30 of the 100 Day Challenge - with my New Year's Eve run I have run 31 days in a row.

So, 1/3 into this challenge I have learned a few things:

- miles accumulate quickly when running every day. Even though my runs are shorter, and my long runs have been under 10 miles (except the Disney Half) I will break 120 miles for January. I usually never break 100 miles in a month unless I am in the height of training for a marathon with 20+ milers built in to the mix.

- it is VERY hard to miss a day. There were a few days I would have quickly bagged a run because of schedule conflicts - but I have stuck to these runs even if my run took place at 9 pm and I did it by running 3 laps around the block. I feel determined not to miss any runs until I complete the challenge.

- the best part of my run is logging it and crossing off another day in the challenge. 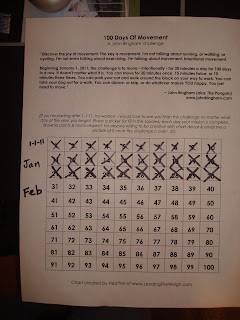 My next race is the Winter Park Road Race, a 10K race run toward the end of March. Last year I ran a PR, completing the race in 1:01:25. At this time last year I was running faster than I am now, but I am hoping to use February to begin to build my speed back up. Who knows, maybe I can PR again this year! :-)
Posted by MarathonChris at 12:20 PM 3 comments:

The Disney World Marathon Weekend - From the Other Side 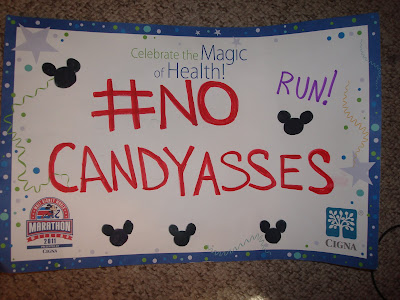 Since 2004 I have participated at some level with the Disney World Marathon weekend, with the exception of 2006 when I was too late to sign up for the half (and not ready to run a full). In 2010, after running my second Goofy (my first Dopey) I decided I would only run the full marathon for 2011, but I waited to sign up. As summer passed and a busy fall season took shape, I realized I didn't have the time to train for a full marathon. I signed up for the half marathon since I couldn't bring myself to completely skip the event. Then, after running the half yesterday, I talked my daughter into getting up at 2 am and driving down to Disney to watch our friends run the full marathon. And that is how I got to see the other side. But first, my race.

Day 1: The Half Marathon 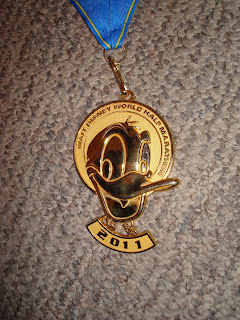 Rather than a long narrative, here is a summmary with a few pics of my half marathon day: 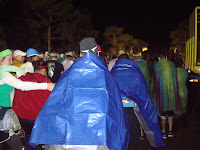 Never saw anyone wear a tarp to the starting area before - it just struck me as different. 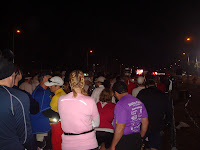 Waiting in my starting corral. I was in Corral C - which was Wave 3. 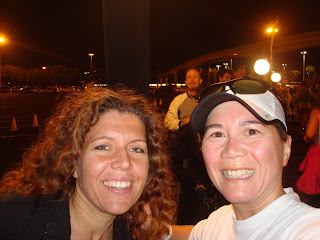 As is typical Disney, there were plenty of characters to see along the course. Maddy was the first just before mile 4. Since I was just taking it easy and having fun, I stopped, got a hug and a picture before moving on. Later I saw Maddy again at mile 7 or so after exiting the Magic Kingdom. Loved the sign.... #nocandyasses.

The race itself was sufficiently hard for my level of training. Having the "I am not trying for a PR" mentality really helped me keep it reasonable and enjoy the run. 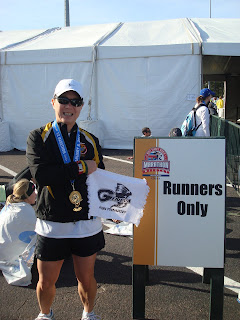 Finished the race and met back up with Maddy. Got a quick picture with my Geneva College Tornado towel and headed home. 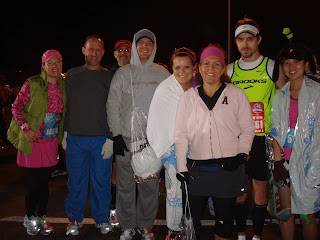 I had the chance to meet quite a few runners who were heading out for the full 26.2 this morning. It was about 10 deg F colder than yesterday so everyone was bundled up. As a spectator, I had plenty of layers I knew I could keep along with a small thermos of hot cocoa. Maddy brought me the infamous sign to use for the day. At 4:45 am, most of the runners headed for the starting area, with the last couple heading over at 5 am.

Now the adventure begins....here are my observations as a spectator:

Observation 1: Lots of runners wait until the last second to head to the start. I always headed over at 4:30 like a good little runner. Lots of runners were still arriving at 5:30. One came up to me to find out where the starting area was.

Observation 2: The medals for the finishers come individually wrapped in plastic. At 5:30 am, volunteers are unwrapping each medal and putting it on the hooks to be awarded after the race.

Observation 3: The finish line area is quiet but there are a few folks who stake out their spot right next to the runner's path near the finishline - at 5:30am.

We got on the monorail at Epcot and headed to the Transportation Center outside of the Magic Kingdom. We were right before the mile 9 marker. Places up on the rail were going fast so we staked our place at about 5:45 am. We expected Maddy to run by around 7:30 am - now we wait....in the cold.

Observation 4: Seeing the first runners come through is very cool! We first saw the first wheel chair, then the first man, and a bit later the first woman runners! You could tell a runner was coming when the folks up ahead of us started to cheer.

Observation 5: Pace groups make it easier to find your runner. I knew Maddy was going for a 4:45 pace / finish, so I knew that she wouldn't show until after the 4:00 or 4:15 pace groups. I was able to spot her in the crowd and get some video of her running by.


Observation 6: Waiting for 2 hours to watch a friend run by in their best marathon ever.....priceless!

After catching Maddy again after mile 12, my daughter and I headed to IHOP for breakfast. 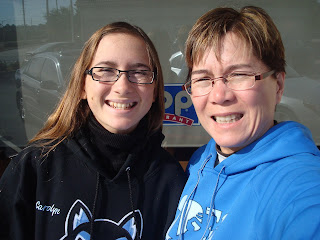 It was odd being the spectator and not the runner - but I got to see a very different side of a race. I saw dedicated family members waiting in the cold to watch for a loved one or friend - hours before they would come - to watch their 15 sec of glory running by. I saw race volunteers helping late runners get to the start, unwrapping thousands of medals for the runners, and setting up water stops in the dark. I saw volunteer band members beating their drums to warm up in the cold before the runners arrive and Disney cast members pointing the way to a lone vendor with coffee and hot cocoa.

As a runner - I have so appreciate these folks - and today I appreciate them so much more!
Posted by MarathonChris at 12:30 PM 6 comments: